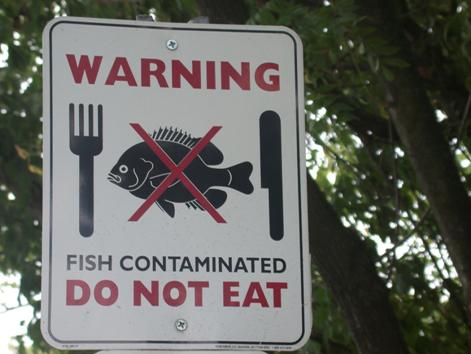 The data is clearer than ever: toxic contamination in the Columbia River Basin is a significant threat to the environment and human health.  There are many contaminants including mercury, DDT and its breakdown products, PCB’s and PBDE flame-retardants that are found throughout the Columbia River Basin that harm fish, wildlife and people.  The contamination is the collective result of many activities over many years, it is extensive and requires a comprehensive solution.

Fish, birds, animals, people, habitat, and the economy are all affected. Contaminants in flame-retardants, pharmaceuticals and other chemicals cause male fish to morph to females during their life cycle. Thirteen types of salmon that use the lower Columbia are threatened or endangered and listed under the Endangered Species Act.  Toxics also affect the developing brains of children and alter behavior and learning.  Contamination gets in the way of the dredging necessary to keep ports and marinas operational; the disposal costs are high and the disposal sites limited.

In September 2013, Oregon and Washington health officials advised that eating certain resident fish from the Columbia River could have negative health effects on people. Fish that live their entire life near the Bonneville Dam had elevated levels of mercury and polychlorinated biphenyls (PCBs). The advisories warned that consuming too much of these fish can cause damage to organs, the nervous system and reproductive system. Unfortunately, fish advisories are common across the entire Columbia Basin – and they do not go away.

The recent health advisory is alarming but the information is not new – evidence of toxics in the Columbia River was available nearly twenty years ago. The Bi-State Water Quality Program (Bi-State Program), a public-private partnership administered by the states of Oregon and Washington found contaminants in lower Columbia River fish in the mid-1990s.

As a result of those findings, in 1995 the EPA designated the lower Columbia as ‘an estuary of national significance’. The EPA and governors of Oregon and Washington created the Estuary Partnership, a National Estuary Program to create collaborative, locally driven programs to protect and restore the lower Columbia.

Challenge ahead
“The progress is good.  We know what we need to do, even what works.  We just need to do more of it, a lot more of it,” said Debrah Marriott, Executive Director of the Lower Columbia Estuary Partnership.   “The recent fish consumption advisories justify the need for federal support to directly address toxics in the Columbia and fund voluntary restoration efforts here that are on par with other large water bodies around the country.  We have known about the toxics in the Columbia for a long time.  It’s time to take a long overdue bold step.”

The Estuary Partnership is working with members of Congress and regional partners to secure legislation that would fund actions to reduce toxic contamination in the Columbia Basin and recognize the economic and environmental benefits to the nation.