Steigerwald Lake is a US Fish & Wildlife Service National Wildlife Refuge situated along the banks of the Columbia near Washougal, Washington, at the Gateway to the Columbia River Gorge National Scenic Area. Through a collaborative partnership, the lands and waters of the Refuge and the Columbia River were recently reconnected. The collaborative Steigerwald Reconnection Project reconnected 965 acres of Columbia River floodplain after generations separated by a levee, reduced flood risk from Gibbons Creek, improved habitat for fish and wildlife, and created new trails for recreation at the Refuge.

Steigerwald Lake National Wildlife Refuge was first protected in 1987 and by 2019 comprised approximately 1,200 acres of wetlands, fields, woodlands, and a channelized Gibbons Creek. But since the 1960s until 2021, the Columbia River was cut off from the area by a 5.5 mile levee.

The US Army Corps of Engineers constructed the levee to reduce flood risk, however it separated the Columbia from its vast historic floodplain. And although the levee protected the Refuge and adjacent properties from Columbia River floods, it exacerbates internal flooding from Gibbons Creek. The creek was constrained to an artificially elevated channel as it flowed through the Refuge. Even moderate rainfall events often caused flooding that spilled over into the Port of Camas-Washougal and other nearby municipal, commercial and residential properties. This internal flooding required the Port to maintain a costly pumping system.

Partners including the Port, the US Fish and Wildlife Service and the Estuary Partnership worked together to develop the project with the shared goals of flood protection, restoring habitat and natural ecosystem functions, and improving recreation opportunities at the Refuge. The project cost more than $32 million dollars and took three years to construct.

Initial work wrapped up and the Refuge reopened in May 2022.

Crews broke ground in summer 2019, when BioHabitats, Inc., a Portland-based restoration company, anchored 84 large wood habitat structures in the Gibbons Creek historic alluvial fan. Some of the wood installed was donated by BNSF Railroad. The structures help stabilize the area and support a variety of species once Gibbons Creek was released into its alluvial fan in the fall of 2021.

Meanwhile, workers with certified B Corp. Ash Creek Forest Management treated invasive species and reforested another 53 acres of the alluvial fan in during the first year of construction.

Over the 2020 and 2021 construction seasons, crews from Vancouver-based Rotschy, Inc. built setback levees to the east and west to protect the neighboring Port of Camas-Washougal industrial park and other landowners, while allowing the Refuge to be reconnected to the Columbia River.

The project removed all Port and City of Washougal infrastructure from the FEMA-mapped floodplain for internal flooding from Gibbons Creek, and is estimated to save the Port $40,000 in pumping costs each year. It also reduces the risk of Gibbons Creek flooding to the highway that runs through the Refuge and adjacent private residences.

In summer of 2021, Rotschy crews removed more than 2 miles of the current levee and created four direct connections with the Columbia River, allowing for seasonal flooding and providing unfettered access to the area for salmon and lamprey.

A critical component of reconnecting the refuge was reconfiguring Gibbons Creek as it flows through the Refuge. For decades, the creek was diverted by a weir and constrained to an artificial elevated canal before it connected to the Columbia River through a fish ladder. This configuration also caused flooding, as Gibbons Creek frequently overflowed its channel. This internal flooding cost the Port of Camas-Washougal thousands of dollars in pumping and maintenance costs.

Before Gibbons could be released from its elevated canal, crews from Washougal’s LKE Corporation created a more natural, meandering channel, and added large wood and gravel riffles. Finally, in fall 2021, crews from Rotschy removed the weir, elevated channel, and fish ladder. This video gives an overview of work done on the creek.

There are also over 115 acres of new wetlands that were created, along with extensive replanting with native species. Overall throughout the project, contractors including Ash Creek Forestry and R. Franco Restoration planted more than half a million trees and shrubs and 14,000 pounds of native seeds. Estuary Partnership staff made a concerted effort to expand the existing wapato community at the site by harvesting and planting 2,000 wapato tubers, seeding wetland areas with 30 pounds of hand-harvested wapato seed, and transplanting live plants that would otherwise be impacted by levee construction. Wapato is an important first food and members of local Tribes will be able to harvest here in the future.

Additionally, in coordination with the Washington Department of Transportation, the project raised State Route 14 three feet to bring it up to the Columbia River's 500 year flood stage. SR-14 also benefits from reduced flood risk from Gibbons Creek. 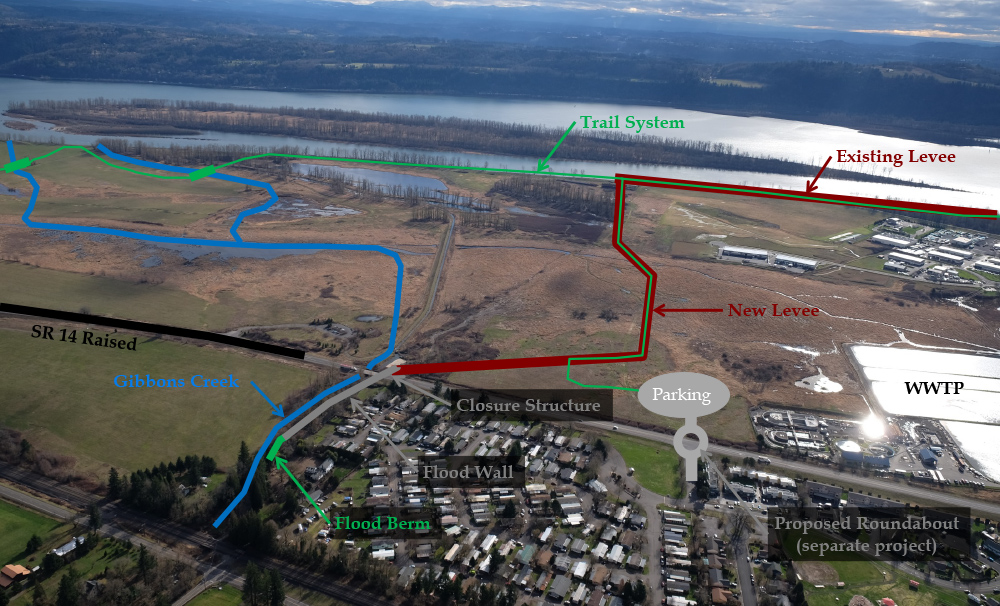 The project also includes a new parking lot and amenities, viewing platforms, and adds more than a mile of trail to the Refuge’s trail system.

Over the three years of construction, the project also generated 550 local family wage jobs and provided opportunities for thousands of local students and community members to volunteer and contribute to the project.

There and Back Again: A Fish Salvage Story at Steigerwald Lake

Diverted No Longer: Reconnecting Gibbons Creek to the Floodplain

What About the Fish? Relocation at Steigerwald Lake NWR

View the effectiveness monitoring and adaptive management plan for Steigerwald